This is a blog about images and stories, technology and craft.  For the sake of Yaakov as well as others I will risk a distance from the normal sparseness of words and do my best to write a little about the symbolism in Jacob Wrestling With God.

When I make a painting, there is always a tension between intent and intuition.  In the painting of Jacob, there is meaning that I intended to place there and there is meaning that emerges as I work, often pointed out by an outside observer.  Both are placed there in faith, and both are discovered again in faith.  I receive requests to reproduce the image of Jacob Wrestling with God regularly.  Whatever other arrangements are made, I always beg the insight of the requestor, because I want to know what has been placed in my work by God, which is hidden to me, but perhaps not to them.  One gracious responder was Robbie Pruitt, who actually wrote a review of the work, which can be read on his blog.

Violence and intimacy.  The violence and intimacy of this wrestling match.  What did it sound like, how did it smell, the sweat of God and Jacob mingled in the dust?  Those who are willing to pursue God and his blessing with such force receive honor from me.  I don’t know what Jacob was thinking.  But I know I wish I had the guts to engage my God with such an intertwined closeness.  I despise the distance of religion.  I use that distance to keep myself “safe” in this life, but at what cost.  Even if I am annihilated, at least I may have a glimpse of His glory before I am withered back to dust.  I want to know who He made me to be, why I am here, what my name is, even if I have to wrestle with one who could wither me with a glance.  This story is a profound mystery to me, but I love it because God made himself vulnerable for the sake of this man whom He loved.  I don’t get that, but it makes me love Him even more.  I would rather be undone by the _ord than sit here safe and placid before my computer.

The banner has been present in my work for decades.  I won’t go into all it’s permutations, but in this case I think of it as God’s declaration and promise over Jacob.  It contains mysteries and words spoken in the Spirit from the beginning of creation until the end of days.  They are blank, because, who am I to presume.

The curtains speak both of intimacy and story, as they are drawn back to reveal a glimpse of the man Jacob’s story and intimacy with his God.  The curtains as well always recall to me the curtain that separated the most holy place of the temple, where the presence of God would come.  Then when it was torn apart when Jesus was crucified;  another time of violence and intimacy, when God made Himself vulnerable for those He loved.

The hands reveal the glory.

There is something important to me concerning of the knee of Jacob near the stone in the corner, but I do not understand what.

The nudity of Jacob, perhaps goes without saying.  But nothing is hidden from God.

There used to be a couple of ladders toppling about in the struggle, recalling a previous encounter Jacob had, but I decided to paint over them.

There is more in this story, because it is God’s.  But this is what I have painted.  Please, be welcome to offer your insights, and I thank those of you who have risked writing comments and emails.

(Below is a progression of the painting)

Below is the drawing that came first, and a linocut based on the painting. 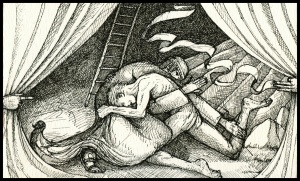 15 thoughts on “Symbolism of Jacob (Violence and Intimacy)”